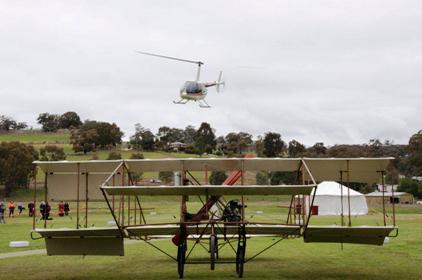 Visitors to the Victorian town of Mia Mia could have been forgiven for thinking they had stepped back into the early 1900s last week as the town paused to celebrate the centenary of powered flight.

Celebrations paid homage to a time when shiny vintage cars ruled the roads, and the paddocks of the local “Spring Plains” property launched Australia’s first true flying machine into history.

More than 2,000 aviation and historical enthusiasts came through Mia Mia during the two-day celebrations to witness an antique plane flyover, a vintage car rally and an immaculate replica of the original “Duigan flyer”.

At a ceremony hosted by Victorian Governor Professor David de Kretser, hundreds of locals commemorated the moment on July 16, 1910 when brothers John and Reg Duigan first flew their homemade bi-plane.

The Duigan flight was less than a decade after the Wright brothers first took to the skies and, having never seen a plane, John and Reg used Maxim’s Artificial and Natural Flight to inspire their design.

“Uncle Jack received a postcard from a friend in England with an image of a flying machine,” he said at the unveiling.

Mr Duigan stressed that John Duigan was an educated man and a talented engineer who relished the challenge of building an aircraft.

He ignored the widespread opinion that the feat could not be achieved in a shed in Mia Mia and, in 1911, was happy to prove the critics wrong when he flew the Duigan bi-plane in front of 1,000 spectators at Bendigo.

For many visitors, the highlight of the centenary weekend was the unveiling of a flying replica of the Duigan plane, painstakingly built in Geelong by aviation enthusiast Duigan flyer Terry Egan.

The replica faithfully reproduced each of the original’s innovative design features, including its rolling, pneumatic suspension and piano-wire tensioners.

To keep the Duigan spirit alive, Mr Egan plans to fly the replica at Bendigo in October and at next year’s Avalon Airshow.

But the commemorations were not all about looking at the past; the Duigan centenary celebrations also looked to the future.

At a celebration dinner on July 16, the Flight Safety Foundation announced that an ongoing school and university education innovation program would also bear the Duigan name.

The program will aim to use the Duigan story to inspire potential aviators and encourage today’s youth to look to the skies in the future.