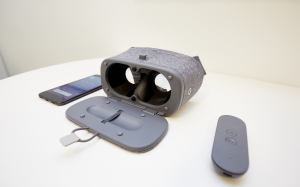 People who dread speaking in front of an audience can now be the first in Australia to experience Virtual Reality (VR) training that calms their nerves by allowing them to practise in front of a “live” crowd.

The Australian-first training allows participants to be immersed in a public speaking scenario in front of more than 50 real people, who were filmed in a lecture theatre at The University of Queensland.

Cole Lawson Communications Training Manager Rhiannon Smith said the course â€“ being marketed to corporate and government executives, managers and employees â€“ was â€˜as real as you can get’ without being behind the podium.

“The challenge for new presenters is often applying what has been learned in training to a real-life situation, which can be the most terrifying aspect,” she said.

“Some speakers have a very real physical and emotional reaction to dozens of eyes upon them, and that is the experience we are trying to simulate and help them overcome in the training room or the comfort of their own home.”

Those who do the course and want further practise can even take the audience home with them.

“After the training, participants can hire a headset and software and take it home to practise their presentation in front of a real audience, rather than in front of the mirror,” Ms Smith said.

The software, which was custom-built for Cole Lawson by Newstead-based creative agency Khemistry, allows participants to practise for real speeches by loading their own presentation points into the VR. These notes then appear on the screen within the virtual environment, with which they can interact.

“Thanks to VR, we can now create an effective illusion of presenting to a large group and, along with that, give participants a chance to practise tackling any nerves using their real presentation notes, so they are completely prepared when they experience the real thing.”

Ms Smith said the technology would increase both the longevity and quality of participants’ learning outcomes, providing greater value for clients and setting a new industry standard.

She said the heightened reality of the experience was also likely to further challenge, motivate and inspire participants.

“It does this by improving participants’ engagement and giving them more ownership over their learning experience,” Ms Smith said.

The first organisation to take advantage of this new technology is Queensland Investment Corporation (QIC), whose employees will be given the opportunity to hone their skills in front of a virtual audience in training sessions throughout the year.

This latest offering is part of the award-winning agency’s strategy to remain an innovative, competitive player in public relations during the age of digital disruption.