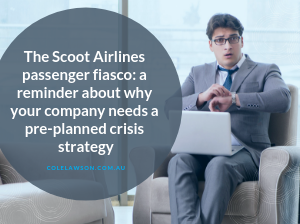 A few weeks ago, we saw Scoot Airlines hit the headlines when an unruly passenger started attacking other passengers on-board a flight. Although situations like this are not an airline’s fault, what they do next is pivotal to preventing their reputation from being tarnished.

Research conducted by Cranfield University suggests that some companies can lose an average of 12 per cent of their share value as the result of a crisis like this, while others can gain a 5 per cent share value. There are two key factors that affect these statistics, so it’s important to understand what sets these two categories of companies apart.

1.     Companies who respond promptly to a crisis and implement effective crisis management strategies are likely to sustain or grow share value post-crisis.

It may seem obvious, but rapidly responding to a reputational crisis can determine whether or not members of the media and the general public choose to launch an all-out war against your company. Scoot Airlines were prompt enough to have a statement ready for the press; however, their response fell short from an operational perspective. Customers who missed their connecting flight as a result of the plane diverting to Sydney were made to sleep in the airport overnight. This certainly isn’t a best practice response to a crisis, and customers were quick to share their experience online.

A robust, pre-planned crisis strategy would have made it possible for staff to know what to do with the unhappy customers. At the minimum, this should have meant providing a bed for the night. While this may seem like an expensive option, the cost to reputation and share prices can be far greater than the cost of a few hotel rooms.

2.     Companies that have already established a strong, consistent reputation over time are more likely to sustain and even grow their shares through a crisis.

Scoot Airlines’ reputation is based on their offering of cheap flights, rather than exceptional customer service or a high-quality flying experience. On top of this, Scoot Airlines took over Tigerair Singapore, which had such a poor reputation that it impacted their stock price. A massive 40 per cent of the company’s stock was bought for a meagre $1, which doesn’t help Scoot’s current reputation. These reputational weaknesses mean that these companies can suffer a massive loss when their reputation encounters a hostile 24-hour news cycle. Some speculate if the low-cost airline will survive this crisis, or if the subsidiary will be swallowed whole by parent company, Singapore Airlines.

This brings us to the importance of preparing for a crisis. There are so many companies that don’t know about the reputational risks associated with a business crisis until it’s too late. At Cole Lawson, we specialise in creating crisis management strategies and plans to put in place before a crisis occurs. Every possibility is planned out from small risks to large ones and tailored to suit the needs of your specific organisation. If, or more likely, when a crisis hits, you’ll have media statements at the ready, a clear plan of attack, and highly trained staff who know what to do next.

We love talking crisis and everything PR-related, so feel free to contact us on 07 3221 2220, or info@colelawson.com.au