Why corporate conscience is your most important asset in a crisis 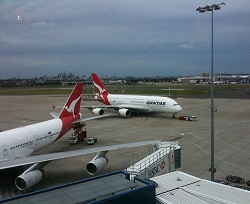 As the dust settles on the QANTAS Dubai debacle, the reported stories of 480 stranded passengers arriving late into Sydney have left the airline with important questions to answer.

Such as, how did the airline manage to take an inconvenient, yet manageable situation, and turn it into a frustrating mess that dominated headlines throughout the new year’s news cycle?

In case you have missed the angry passenger tweets, facebook posts and associated news reports, flight QF2 on Thursday suffered a mechanical problem in Dubai and was, quite rightly, grounded.

Passengers from another flight were “bumped” and, ultimately, stranded in Dubai, so some of the original passengers could make it home.

But, while hundreds of others were messed around, one of the passengers who made it onto the next available flight was the airline’s own CEO, Alan Joyce, one of the country’s most recognisable executives and the face of the airline.

Mr Joyce’s presence, but reported lack of visibility during this situation, is a horrendous PR misstep for QANTAS.

While Mr Joyce was on the flight home, stranded passengers were busy on social media.

As they became increasingly upset at the lack of any QANTAS personnel on the ground, the inability of partner airline Emirates to help, and the conflicting information received, they angrily condemned the airline’s communications, preparedness and general organisation.

While trying to give Mr Joyce the benefit of the doubt about the importance of him getting home (A sick relative? A family emergency?), I find it hard to believe that there was a more important place for him to be.

Think about how the situation could have played out if Mr Joyce gave up his seat on the first flight out to someone who desperately needed to get home, and stayed at the hotel with the 480 delayed passengers.

He could have been an information conduit, stoically informing his fellow delayed passengers in person that, on principle, he wouldn’t be going home until the very last person affected by the delay was buckled into a seat on an aircraft heading for Sydney.

Mr Joyce could have spoken directly to the accountable people at his airline and saved passengers hours of frustration and time on hold by delivering correct and trustworthy information, even if that information was simply a list of the scenarios that could play out. Many passengers would have been grateful for his efforts.

Mr Joyce could have authorised some entertainment, refreshments or a QANTAS-sponsored new year’s celebration for those left displaced by the upset.

Instead, the stranded passengers reported that they didn’t even get a glass of champagne on board when they finally boarded the flight back home on New Year’s Eve.

Mr Joyce and QANTAS had a dozen opportunities during this incident to deliver some moments of humanity and corporate conscience. Imagine the stories we’d be reading if he had.

Instead, he arrived home to tweets complaining about issues that he would have been in an ideal position to fix or, at least, frustrations with which he could have personally empathised.

I deal routinely with companies and executives in situations that could lead to major brand damage. What many may initially not realise is that it’s not the initial incident that turns an issue into a debacle â€“ it’s the organisation’s ability to demonstrate conscience through its actions.

The conscience required from leaders to turn such events into opportunities elevates successful companies above others. It demonstrates the brand’s true character through its leadership.

1. do the right thing rather than the easy thing

2. know that it’s not about carefully worded statements, it’s about actions

3. take personal accountability for the problem and see it through until it is solved

4. put others first, treating them as more important than themselves

6. cop any costs to ensure that they have really done everything possible, not everything the basic incident budget allows.

In many cases, the honesty and humility of such leaders results in their companies being lauded, and turns potential critics into long-term advocates.

But the opposite happens far too often and we hear about executives who become invisible in a crisis, fudge the truth, and appear to take what they can get in the midst of the drama (think Deborah Thomas from Ardent Leisure).

It is an all-too-frequent example of heads of business appearing to act in self-interest.

So, as well as the media training, interview preparation, and disaster preparedness that big companies invariably do, I’ll suggest a different type of training that CEOs and boards should engage in – “corporate conscience” development.

We need to instil leaders with the ability to do the right thing because it’s right. This will deliver more PR value than 1,000 carefully worded interviews.

However, in case the above doesn’t resonate with Mr Joyce, he could simply try to keep in mind a pearl of wisdom my mother gave me before letting me embark on daily bus journeys to school. She said, “If there is ever anyone who needs your seat more than you, you must give it to them.”

Why? Because it’s the right thing to do.

This is even more true when you’re the most powerful person on the bus.