Skills Lab (pt 2): What can the Banking Royal Commission teach us about crisis communications? 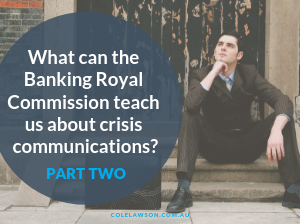 With a backlog of emails from truth-seeking journalists, missed calls from worried investors and floods of angry social media posts, banks embroiled in the Royal Commission are undeniably facing a crisis. Today, in part two of our series, we discuss why a crisis communication plan is so important for this kind of situation.

Key learning: Having a crisis communications plan can make or break an organisation’s reputation.

When facing serious reputational damage, it’s easy to blame the single event that sparks a barrage of negative attention – whether that’s ANZ giving detrimental advice to five per cent of customers or NAB knowingly allowing staff to falsely witness more than 2,500 signatures.

However, the response to these events is just as important as the events themselves. Having a crisis strategy in place can be the difference between suffering from a crisis, surviving one or even growing stronger.

What does a crisis management plan involve?

Identifying all the negative issues and scenarios that can potentially occur within your business is the first step in safeguarding your company. In the case of the Royal Commission, banks should have (and probably did) have a crisis management professional evaluate their institution’s risks. From claims of withholding customer funds to media reports detailing the abuse of customers, the banks should have made a list of any and every reputation-damaging scenario imaginable. The Royal Commission is an extreme example of a reputation-damaging event. However, even a seemingly minor issue, like a customer complaint, can result in disaster, especially if the issue is magnified by the media and social media.

Having a plan of action for every scenario listed in your reputation risk assessment allows you to employ a coordinated and calculated response. Part of ANZ’s response to findings of responding to internal misconduct was to fire over 200 employees, including senior executives, and share this news with the public. While this was a good first step, consistent communication about how the bank is continuing to improve company culture and address misconduct in the long-term is needed to rebuild trust in its brand.

It is also important to know how quickly you should respond to an issue or crisis. Sometimes, you need to jump into action immediately so you don’t miss an opportunity to have your say. However, moving too quickly without enough preparation can also result in awkward missteps, such as when Aussie Home Loans – which is owned by Commonwealth Bank – contradicted Commonwealth Bank’s public position on the Royal Commission’s recommendations. Taking more time to ensure their messaging was consistent and united would have looked better for both organisations.

Once you have identified potential issues and corresponding action plans, the next step is to formulate key messages. Strategic messaging mitigates risk, addresses stakeholder concerns and highlights positive information. It supports your organisation’s brand and the objectives driving your communication response. Decide what information you want to communicate: do you need to lay the facts out? Apologise? Let the public know what you are doing to fix the situation? For example, ANZ’s CEO focused on the message that corruption would not be tolerated at his organisation. He also highlighted their commitment to compensating customers for ANZ’s poor behaviour, citing a $711M hit to profit to rectify the issue. This demonstrates how ANZ has mitigated the impact of negative information while simultaneously capitalising on positive information.

Putting together a crisis plan is a strategic feat that requires consideration of internal procedures, external factors and best practice. If you want to find out how your organisation can prepare for a crisis, please get into contact with us for more information.