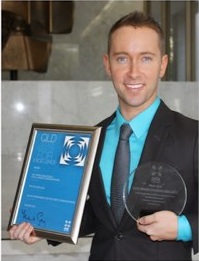 The Public Relations Institute of Australia (PRIA) shortlisted five contenders for the award through a round of preliminary written applications before undertaking an interview that sealed Patrick’s spot as the overall winner.

Patrick will travel to Melbourne in November as part of his prize to represent the youth of the PR profession at the World Public Relations Forum, a biannual global industry event being held in Australia for the first time.

The accolade came just one month after the former television personality was awarded an unrelated PRIA Queensland State Award for Excellence for his work in issues management and recovery communications.

Patrick said: “Industry recognition like this is important not only for the promotion of best practice within our profession, but also to prove to other sectors that public relations is a valid social science and strategic business tool with proven power.”

Patrick has an unusual mix of qualifications and experience covering public relations, television and the law. His unique background has seen him forge a niche career in media relations and issues management.

The judging panel cited Patrick’s sense of direction, commitment to pro bono work and opinion piece writing skills as the leading reasons for his selection as the emerging public relations professional of the year.

Prior to working in public relations, Patrick was a former children’s television presenter for shows like Puzzle Play, Giddy Goanna and Picnic in the Park and has appeared nationally on every free-to-air network in Australia.

You can read more about the Ian Robertson Award at the PRIA’s web site here.